“this show also explores another darkness: that of the human heart. those old enough to miss telling scary campfire stories will find pleasant chills here, and something to think about, too.”  – The New York Times – Laurel Graber

Main Character Breakdown:
Alice –female.  Spunky, adventurous. Sincere.  Played by an adult
Queen of Hearts -Any Gender – Ruthless wannabe rock star.  All powerful but not
White Rabbit: Male – Baritone – who moves well.  Nervous rabbit who is always late
Mad Hatter: Any gender – quirky and wild
Mock Turtle: Any gender – Slow and lazy
Gryphon:  Any gender -  a bit of a know it all
March Hare: Any gender.  Quite mad and loves to laugh
Door Mouse: Any gender – a sleepy, sweet, adorable mouse
Cheshire Cat: Female – Fiesty feline
Caterpillar: Any gender – Mysterious and wise
King of Hearts: Any gender – a bit of a fool but he doesn’t know it
Dodo Bird: Any gender – Snobby bird.  Aristocratic
Ensemble roles include: The Page, Lorina, Victorian man and woman, and the Tear Mouse

Townspeople:  A variety of male and female of all ages and types.  Ensemble can be any size 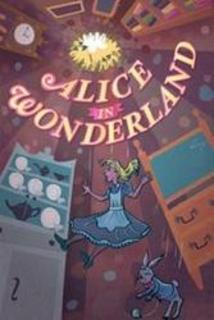 Tumble down the rabbit hole with the wonderfully, wild, wacky and whimsical cast of characters in this charming musical of Alice in Wonderland by Michael Sgouros and Brenda Bell.  Frolic with Alice as she dances her way through Lewis Carroll’s legendary tale.  Meet the White rabbit – if you can catch him!  Don’t forget to bow to the Queen of Hearts or she’ll chop off your head – oh my!  60 minutes of marvelous mayhem set to music.  It is sure to be a mad tea party and you’re the guest of honor!

Alice in Wonderland ran Off-Broadway at the historic Players Theatre and was nominated for an Off-Broadway Alliance Award for Best Family Show and was highly recommended by the Lewis Carroll Society.

Standing in the lobby of the Players Theatre, one of the city’s legendary theatrical venues, I witnessed first-hand the seemingly nonstop parade of kids, parents, and grandparents who shed their dripping raingear to enter the intimate red-walled theater. As Carroll put it in "Through the Looking-Glass," his follow-up to Wonderland: "And thick and fast they came at last/and more, and more/and more…" Clearly I underestimated the excited gaggle of Wonderland fans ready, willing, and psyched to hop down the nearest rabbit hole with Alice and cavort with the White Rabbit, DoDo Bird, Caterpillar, Cheshire Cat, Mad Hatter, March Hare, King and Queen of Hearts, and assorted others. - Big Apple Parent