Charles Dickens’ classic holiday tale about the joy of community triumphing over selfishness, presented in this fresh musical adaptation by Sgouros & Bell. Follow Ebenezer Scrooge on his emotional journey, as he is visited by four forewarning ghosts. Will Scrooge catch the holiday spirit and save himself in the process?  This special holiday show with a story so warm it will melt the cold heart of even the grumpiest Scrooge has been running Off-Broadway since 2009.

Main Character Breakdown:
Ebenezer Scrooge -(40-60 Tenor)
A grumpy yet comical old miser who hates the joy of Christmas.  He is visited by four ghost who show him the path to redemption.

Bob Cratchit - (20-30 Tenor)
Scrooge's clerk, a kind, mild, and very poor man with a large family. Though treated harshly by his boss, Cratchit remains a humble and dedicated employee.

Jacob Marley - (25-45 Bari-Tenor)
In the living world, Ebenezer Scrooge's equally greedy partner. Marley died seven years before the narrative opens. He appears to Scrooge as a ghost condemned to wander the world bound in heavy chains. Marley hopes to save his old partner from suffering a similar fate.

The Ghost of Christmas Past - (Female 20-40 Mezzo)
The first spirit to visit Scrooge, a warm motherly apparition with a glowing head. She takes Scrooge on a tour of Christmases in his past.

The Ghost of Christmas Present - (Female 25-50 Mezzo)
The second spirit to visit Scrooge, a spritely pixie-like spirit whose lifespan is restricted to Christmas Day. She escorts Scrooge on a tour of his contemporaries' Holiday celebrations.

The Ghost of Christmas Yet to Come - (Male or Female – Dancer type )
The third and final spirit to visit Scrooge, a silent phantom clad in a hooded black robe. He presents Scrooge with an ominous view of his lonely death.

Fred - (20-30 Baritone)
Scrooge's nephew, a genial man who loves Christmas. He invites Scrooge to his Christmas party every year, only to be refused by his grumpy uncle.

Fezziwig - (30-50 baritone)
The jovial merchant with whom the young Scrooge apprenticed. Fezziwig was renowned for his wonderful Christmas parties.

Belle - (20-30 soprano)
A beautiful woman who Scrooge loved deeply when he was a young man. Belle broke off their engagement after Scrooge became consumed with greed and the lust for wealth. She later married another man.

The Portly Gentlemen (John and Howard) - (30-50 Tenor/Baritone)
Two gentlemen who visit Scrooge at the beginning of the tale seeking charitable contributions. Scrooge promptly throws them out of his office. Upon meeting one of them on the street after his visitations, he promises to make lavish donations to help the poor.

Tiny Tim - (5-8 child)
The youngest son of Bob Cratchit who is very ill but full of love and joy.

Fan - (10-16 female)
Scrooges sister who is revealed to him in flashbacks.  Sweet and kind 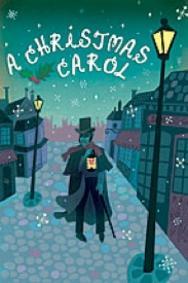